I do love my steaks, but more than that I love my husband. And he is a true carnivore. So we are often on the look-out for good places to get steak and burgers in Jakarta. We’ve found that many restaurants in the city tend to overcook good meat (travesty! Though entirely common in Southeast Asia), and may not always take their produce from top quality supply (thus ending up with steak that leaves much to be desired in flavor – often too fatty, or not fatty enough). Enter: Ruth’s Chris. An old friend of mine, now based in New Orleans, manages the Steakhouse’s flagship store, and had mentioned it to me in passing some time ago over email (“Oh we’re opening up a Ruth’s in Jakarta!”). It had slipped my mind until one day, as Jay and I were exiting a mall we frequent, we noticed its signage across the street. Not long after, we booked a table for our anniversary (in February this year) to see what all the fuss was about.

When  you first walk into Ruth’s, it feels like you’re entering a private club or a speakeasy even. The foyer is all dark wood and brass, subtle art deco accents, and rather plain. A host or hostess greets you, takes your name against a reservation notebook, and then walks you around a corner behind her where you are suddenly greeted with an art deco bar, matching booths, and beyond that the main dining area: plush couches, bronze and gold accents, jazzy music in the background. It feels straight out of The Great Gatsby somewhat.

On that anniversary visit, a kind lady guided us to our seats by a window. A knowledgable server with impeccable English came to bring menus over, suggest wines, and give us a quick overview of the concept. He also asked if we might be there for a special occasion and appeared to take note. While we were reading over the menu, we were served fresh warm baguette and butter to whet our appetites as well.

The menu is extensive. It includes starters (like Sizzlin’ Blue Crab Cakes [230k], and Beef Carpaccio [210k]), salads and soups (Caesar [130k], Ruth’s Chop Salad [130k]), lobster bisque [150k]), seafood and specialties (lamb chops [650k], barbecued shrimp [410k]), and of course their steaks, and a plethora of sides to go with them. It’s clear (by name alone, of course) that while they may have other popular dishes, Ruth’s is first and foremost here to impress you with their meat. As their menu states, “Ruth’s Chris specializes in the finest custom-aged Midwestern  beef, we broil it exactly the way you like it at 1800ºF (980ºC). Then we serve your steak sizzling on a 500ºF (260ºC) plate so it stays hot throughout your meal. Our steaks are served sizzling in butter. Please specify if you want extra butter or none.” This in itself is a draw as I have not yet been to any other steakhouse in Indonesia that serves their meat this way.

That day we ordered a 12oz Medium Rare ribeye steak for Jay (650k) and a 6oz Petit Filet Mignon for myself (420k), as well as fries (Julienned Potatoes, 110k) and creamed spinach (110k). The meat was cooked perfectly, the sides were generous in portion, and the servers were kind and attentive. We raved to each other throughout the meal at how high quality the meat was — how tasty it was, properly seasoned, and well-treated. But best of all, not only did those hot plates keep our steaks warm all evening, they also helped continue to render the fat down – which made for an even tastier meal.

At the end of an evening, as the literal cherry on top of the sundae, the waiters brought us a complementary dessert, congratulated us on our anniversary, and even took a picture of us which they printed on site, framed in a cardboard “Ruth’s Chris” branded envelope, and gave to us as a keepsake to take home.

We had such an enjoyable time that we were soon back once more! For my birthday…then for Jay’s…and then again to take my parents to lunch just the other week while they were visiting. We only had one negative experience when, for one of our birthdays, the steak came closer to Medium Well than Medium Rare, as a result it continued to cook on the hot plate and was well done before the meal was over. As a consequence from that, Jay has always stressed “Medium Rare, closer to Rare” since then. The plus is that if it comes slightly under-done, you can always send pieces of it back to get a little more brown onto your meat. Also, recently we sent back pieces of fat that hadn’t rendered to have it cooked down further, and they happily obliged, bringing back a plate of crispy fried beef fat 5 minutes later. Yes, heart attack. But also: YUM!

Suffice to say Ruth’s Chris has become a mainstay for us – a favorite that has overtaken previous “faves”. To our tastebuds, it is far superior to other steaks we’ve had in Jakarta, and we highly recommend it to other carnivores out there. That said, it isn’t cheap, so be prepared to pay well for the great food and good service.

After multiple visits and trying different things off the menu, we’ve decided our top steak choice is the 16-oz (450g) Rib-Eye Medium-Rare (790k) to share. It presents a perfect balance of meat and fat, and thus the perfect flavor combination for us. We have also tried several of the sides at this point, and our favorites are the creamed spinach, julienned potatoes, and roasted brussel sprouts.

Two weeks ago when my parents were in town, we also ordered a dessert (our first since each time we’d been before that was a special occasion and we were given complementary sweets at the end of each meal): the chocolate molten cake (140k). While I can’t compare it to any of the other desserts on the menu besides what we’d tried for free, I’ll say it was a lovely, pleasantly fluffy but moist chocolate cake that wasn’t too sweet and was perfectly complemented by its sauce and the vanilla ice cream on top. If you like your desserts, I’d say it’s worth a try (if you have room!).

Overall, Ruth’s Chris is a must-visit, and well worth the money you pay for a special occasion from time to time. 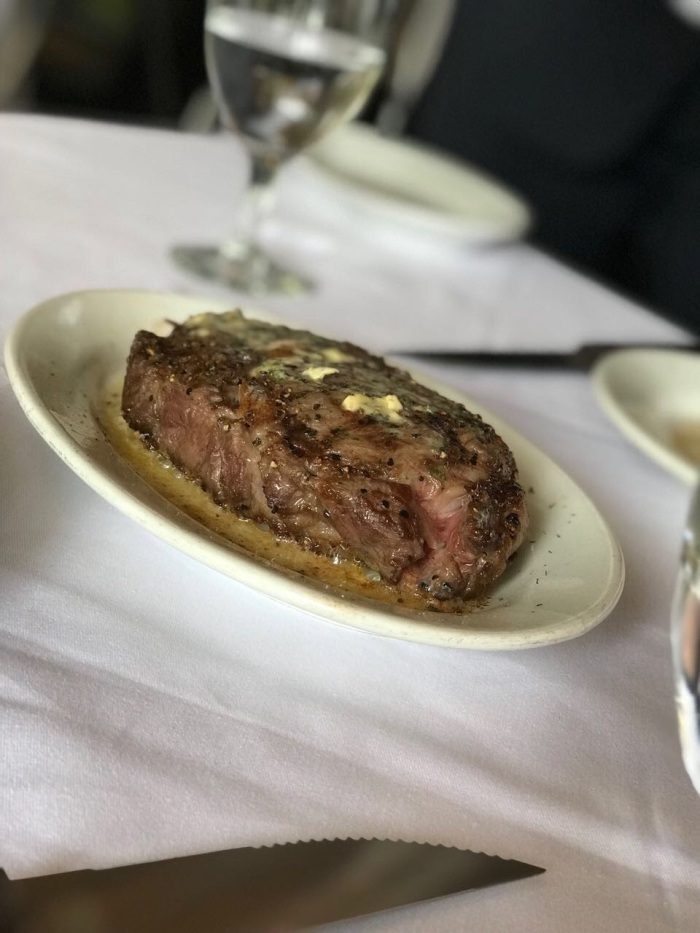 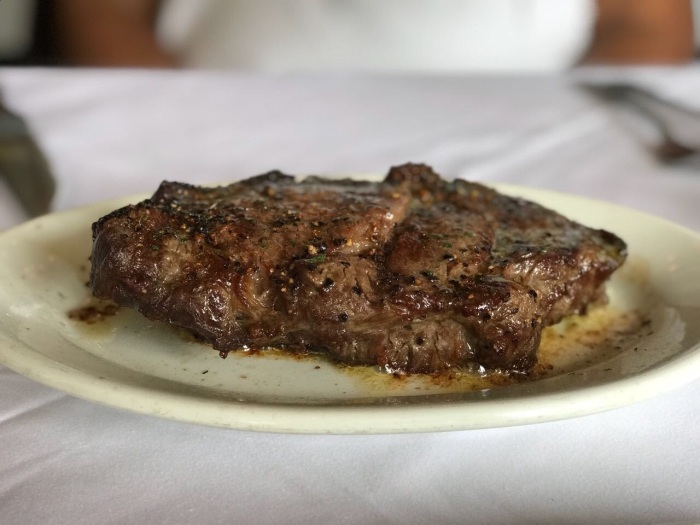 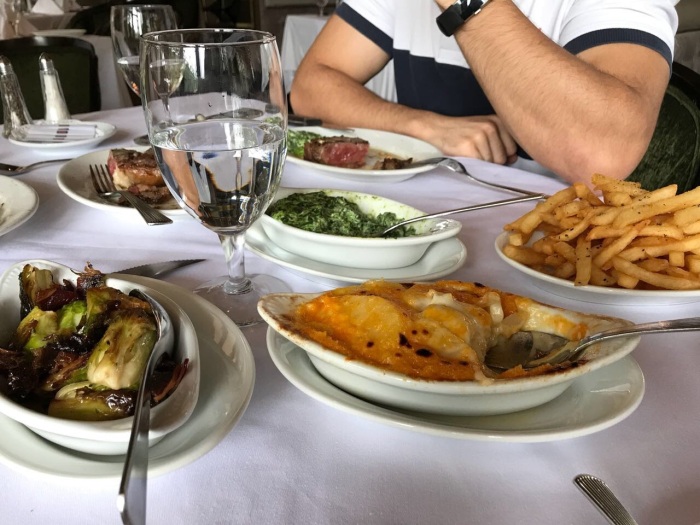 Sides from our most recent visit: Brussel sprouts, potatoes au gratin, julienne potatoes, and in the center: creamed spinach 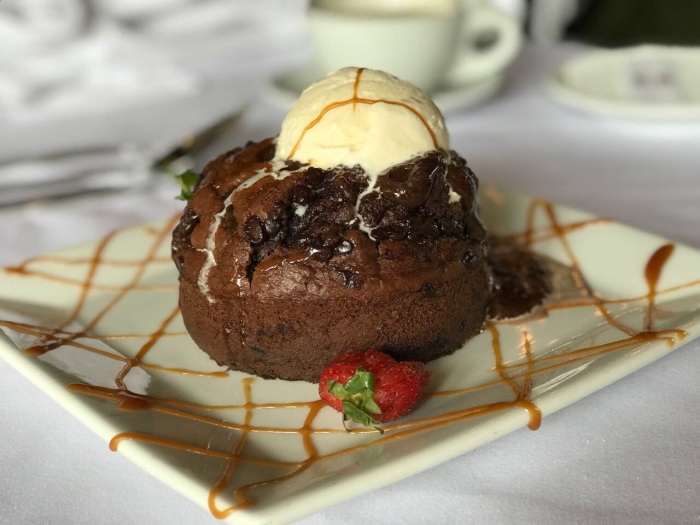 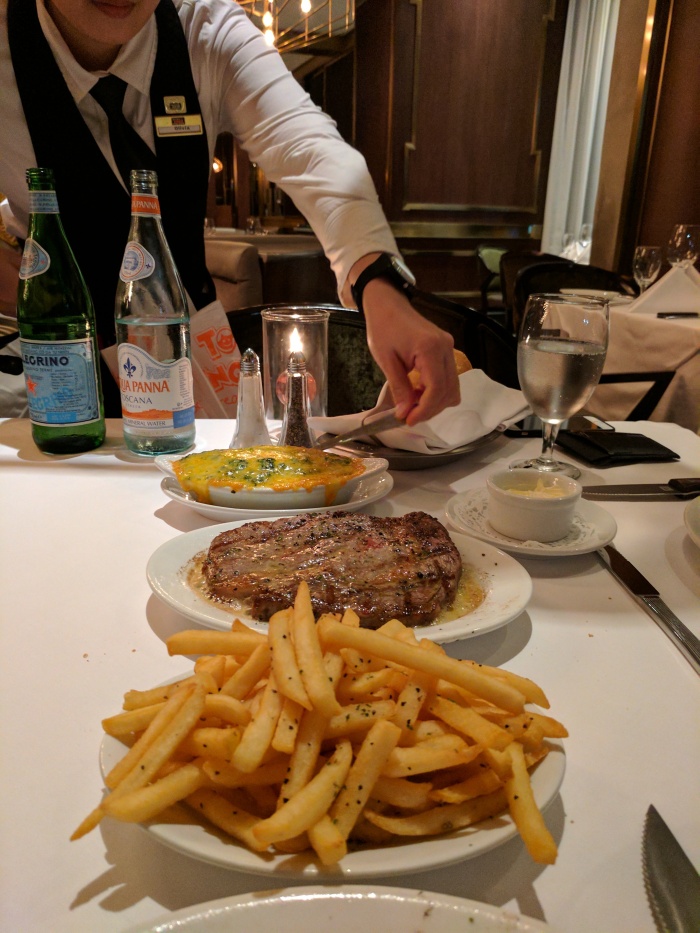 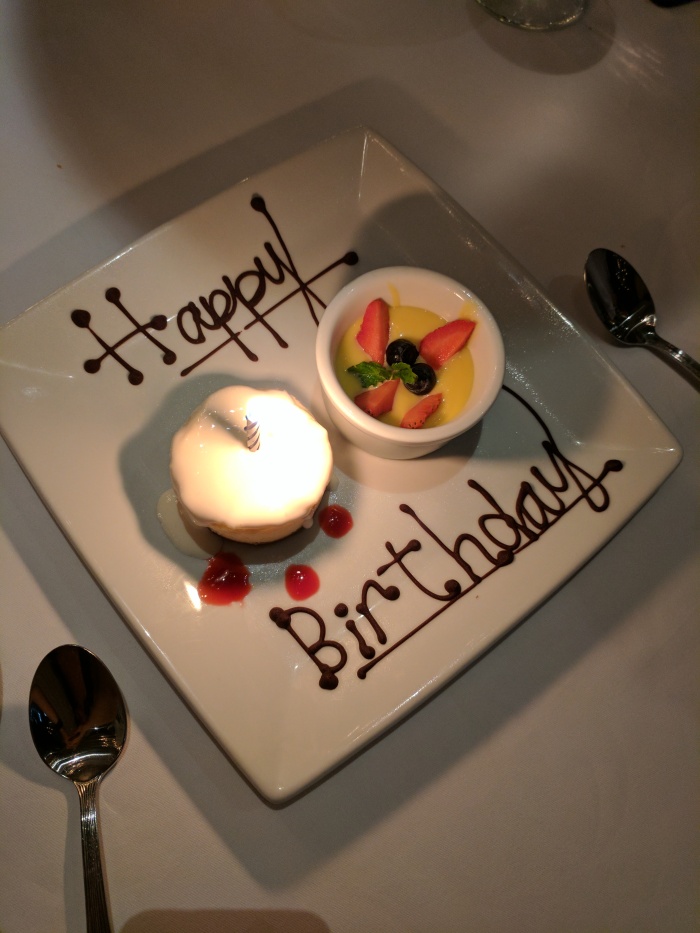 Complementary dessert of fruit custard and cheese cake; not bad!