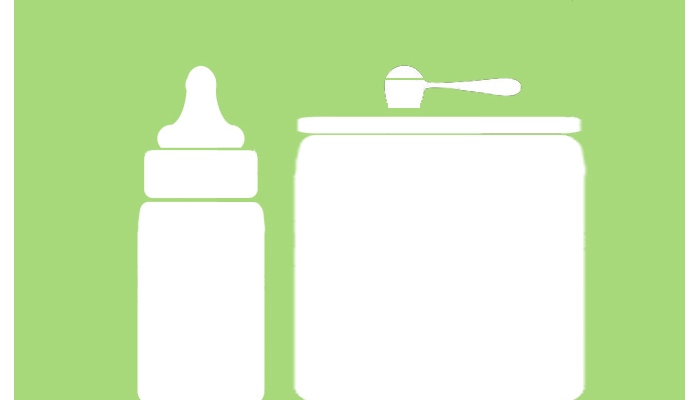 This post is Part 2 in my Spilled Milk series, providing a balanced profiling of different milk options based on objective, medically and scientifically based sources. As mentioned in my first post, which was about breastmilk, I will mostly be compiling research with regards to what these choices are, and will leave the rest to my readers to decide for themselves.

Note that at the end of this series, I will be creating a handy little chart comparing all the options for you!

In my last entry, I covered what I consider to be objective key information about breastmilk. Now I’d like to talk about the “alternative”: formula. Often demonized for being an “inferior choice”, formula can be a taboo subject. For many moms, myself included, particularly in this Baby Friendly Initiative age, pulling out a formula bottle can make us feel like lesser parents, lazy cop-outs — a feeling that is often reinforced by other moms and even doctors/nurses/lactation consultants who (unsolicited or not) provide input on our feeding choices.

If you have read my blog at all, you will know that my son was “exclusively breastfed/fed breastmilk” for the first 6 months of his life save occasional formula “emergencies.” After crossing the 6 month mark, and in the face of supply issues from months of full-time work and other related factors, our son became mixed/”complementarily” fed (60-70% breast, 30-40% formula, and 3 solid meals a day). However, to this day, though I almost never judge other moms for their feeding choices, I do continue to feel occasional fears of judgment, and “failure” (failing my own wishes and expectations) when I pull out a scoop of S26 Gold.

As such, I do hope that, through the course of both my writing and your reading this, some level of enlightenment and peace is reached over the case for formula feeding, and we can all stop judging and shaming each other.

All that said, here’s what we’ll look at today:

#1 History: In the old days (dating way back BC even), wet nurses were the popular substitute in the case of lactation failure or an absent mother. In addition, historical records show that some babies even received animal milk as a substitute — plus pap (a semi-solid breadcrumb based mush), gruel (boiled cereal in milk), or panada (bread cooked in broth) for infants not thriving on the milk. The most common animal milk to use back then was cow’s. However, in the late 1700’s, scientists began to analyze the chemical differences between different milks, and so began the journey towards creating specialized infant milk substitutes designed to mimic (“as closely as possible”) the benefits and composition of human milk. Here is a helpful screencap (from the National Academy of Sciences) with a year-by-year history of infant formula: 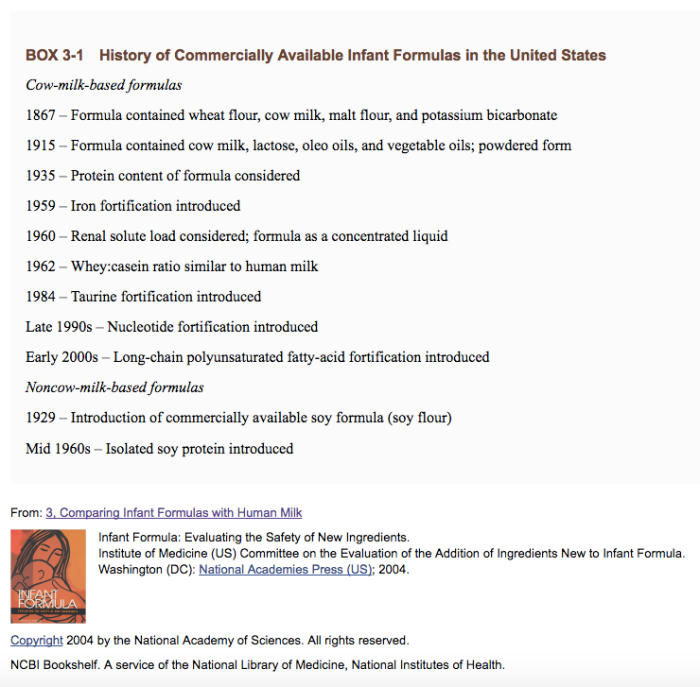 In the late 19th century, formula grew in popularity particularly in response to incredibly high infant mortality rates. The medical industry encouraged mothers to turn to system, schedule, and science in their baby feeding habits. This lasted well into the 50’s in the West, and even further to the 70’s in the East. That’s why, for most of us in our current generation (babies born in the 80’s-early 90’s), our parents come from a time when everyone was formula fed. This was “en vogue,” and what many “modern”, middle-class families did.

In the 50’s, tides shifted more in favor of breast milk in the West, and a couple of decades later the East followed. In 1956, the La Leche League was founded by 7 concerned citizens after the breastfeeding rate in the US dropped to nearly 20%. The group published its first book in 1963 called The Womanly Art of Breastfeeding, and a year later they were incorporated into La Leche League International Inc (LLLI).

In 1990, the breastfeeding rate dropped again to about 50% this time (after decades of consistent improvement between +3-6% year after year), UNICEF and the World Health Organization authored the “Innocenti Declaration on the Protection, Promotion and Support of Breastfeeding.” It was signed by 10 UN Agencies and 32 countries. In conjunction with the Declaration, the Baby-friendly Hospital Initiative (BFHI) was launched. The BFHI was designed to encourage mothers to exclusively breastfeed for at least the first 6 months of life. If your hospital doesn’t allow pumps, bottles, etc, and has a strict no-supplementation-except-in-emergencies policy against formula, glucose water, and the like; then your hospital likely signed on to the BFHI too. See the entire BFHI paper here.

As a result of the movement pushing for a return to breastfeeding, in many places, formula suddenly became the choice of the poor, whilst breastmilk became a luxury for the privileged. Women with time, education, access to good doctors/consultants/healthy food/etc, were more able to breastfeed successfully; and women without the time, resources, and support had to “resort to formula.” But suffice to say, there was a definite shift in perception following the Inncoenti Declaration.

Formula is commonly composed of a cow, or soy milk base, with adjusted protein, fat, and carbohydrates components to more closely mirror the proportions in human milk. As formula was further developed, and more research on breastmilk was done, formula was (and continues to be) modified to include elements that mimicked other benefits of breastmilk. “For example, iron was added in 1959 to reduce the risk of iron deficiency in formula-fed infants, and long-chain polyunsaturated fatty acids were recently added in an effort to improve infant visual and cognitive development.”1

Most formulas, base milk aside, are composed of similar elements. Here is an example of what’s in Wyeth’s S26 Gold formula (also known as “Promil” in many markets) (according to their site): (You can see the full nutritional information here as well)

As research continues to tell us more about the benefits and breakdown of formula, companies iterate to include these elements in their milk.

If you’re a parent who’s used the internet to look up “baby milk” even just once, you will have come across these 5 common criticisms of formula and formula-feeding. I would like to take a moment now to unpack each and see which hold weight and which don’t.

#4 The Pros of Formula Feeding:

This bit is “optional” because I know I promised objective commentary and you’ve basically gotten that above. But I did want to close with my own thoughts on the matter. If you are interested, do read on.

After all of this research on formula and breast milk, I do believe my initial opinion remains: breast milk is still best for babies and breast fed comes second only to best fed. I know that I’ve said that the research is still unreliable on the subject, and it’s true. Results and methods for data collection remain inconsistent, and it may be decades yet before we see really if there is causative truth to the correlations between health issues and formula feeding, for example. However, infant formula is still a man-made concoction created to mimic human milk characteristics, whereas breast milk is the real thing. If you are in any position at all to breastfeed, I encourage you to try it. But if you find that it is too difficult, detrimental to your health (and your child’s), or just not for you (for financial, medical, etc reasons). Then by all means, go the formula route and do not feel guilty about it. But in any situation, the ideal for me would always be to at least give the breast a try, and if it doesn’t work do the next best thing: proudly give your baby formula and rest happy in the fact that you are constantly doing your best for your child, and you are a super-parent no matter what anybody says.

Now I have two more special notes to leave before signing off:

And there it is. The end of my profile on the two main infant milk options. Coming up soon: notes on other milks too! Goat, soy, cow: what’s best to come next as babies enter the toddler years??